I live with 7 Zen Masters; All of them, Cats

Posted by wordsmithluwee on October 31, 2012 in Living and Learning, Nurturing Nature

(The title is adapted from Eckart Tolle’s book The Power of Now.) 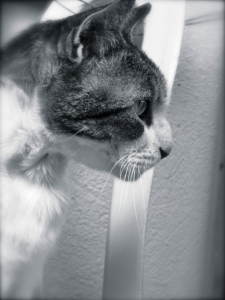 Animals are such great teachers. Observe how they genuinely understand and respect nature, never taking more than they need, not squabbling unnecessarily over things which are of no real importance. 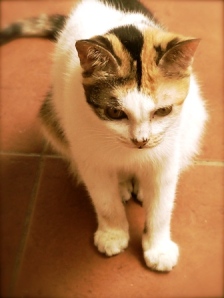 TOMMY: “I like to dip my paws in water!”

Cats, for example, are very peaceful creatures.  Like other animals, they are very protective of their young.

The description catty, often applied to quarrelsome women, does not do cats any justice at all.

On the other hand, feline grace when describing a person’s movement is undeserved by humans whose most graceful maneuvers will always pale by comparison. 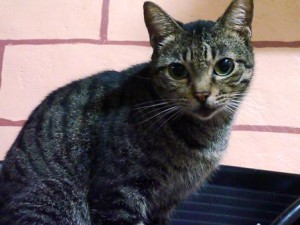 Sadly, humans use animal names as derogatory descriptive references: sly as a fox, strutting  like a peacock, hording like a packrat, eating like a pig, not-to-be trusted snake, and the frequently used comparison, crab mentality. Described as not wanting others to succeed or to get ahead, this human mindset references crabs in a bucket that pull down other crabs to prevent them getting out.   It is an assumption made by a human  about why crabs in a bucket behave that way.  How about trying a crab’s perspective?

BARTOK: Feigned innocence. “It wasn’t me.”

Without a voice, misunderstood, and sometimes mistreated by humans, animals continue to tolerate and even love our specie.

Perhaps their role is to show us humans about natural laws,  caring for mother earth, sharing,  and unconditional love.

The question is Why have we not been paying attention?  Let’s start helping now.

2 comments on “I live with 7 Zen Masters; All of them, Cats”